Visiting the Juan Valdez of the Silleteros 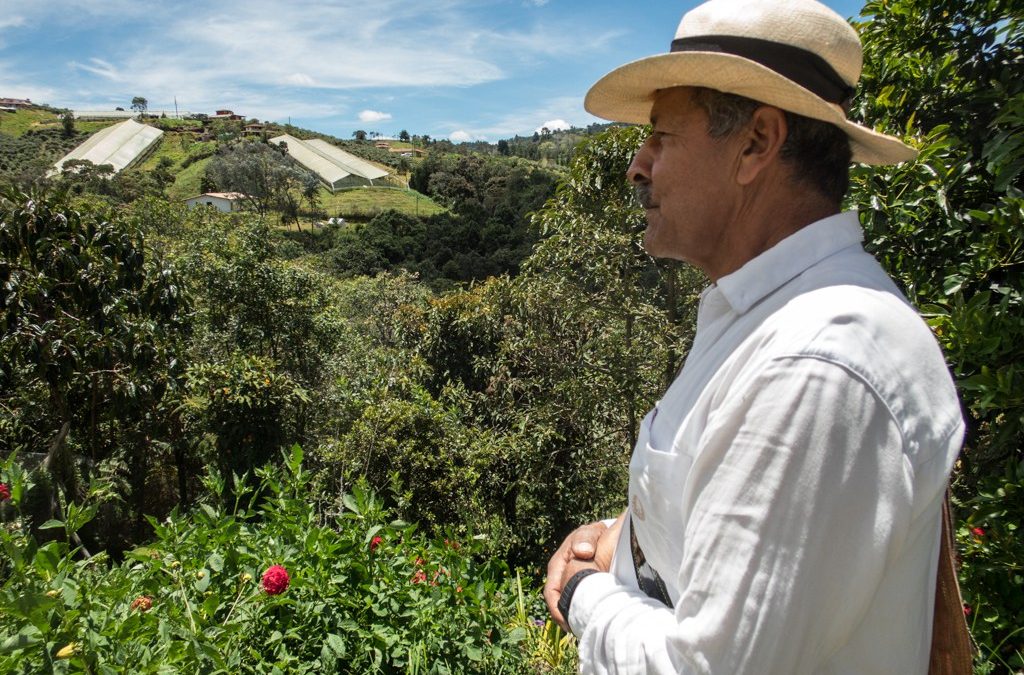 I first met Don Aristides, known colloquially as the “Juan Valdez of the silleteros” in 2013 during a blog trip to Santa Elena.

We were there to learn about the beautiful region, a mere 30 minutes east of Medellín, that gave birth to the flower-arranging tradition in the mid-20th century which continues to be the backbone of the city’s annual Flower Festival.

At the time, he invited me to visit his finca though it would take running into him again a year later, and another invite, for me to make it happen.

And I’m glad I did, because spending time with Don Aristides at his tranquil home in the central hills of Santa Elena turned out to be the perfect escape from the big city, if only for a half day.

The visit began courtesy of Camilo from Medellín City Services, who picked me up, as well as my friends Eric and Karen of Trans-Americas, who were staying in Belén at the time.

We quickly made our way up and out of the city. Along the way, Camilo told us about Don Aristides’ directions to his home, which were to “turn right at the second phone booth and then left at the big cedar tree.”

If you thought finding an address in Medellín was tricky, just try it once you’re in the countryside. Thankfully, we had Camilo’s help, plus he acted as a translator so we wouldn’t miss any of the details in our host’s stories (all of which were in Spanish).

Don Aristides home, named Finca Chaguaro after a type of tree on the property, sits on a tall hill with a commanding view of the surrounding farms. It was built on land purchased by his father in 1928; he’s lived there for over 40 years.

His driveway is steep; we had to leave Camilo’s SUV at the bottom and walk up it. Our host was there to greet us halfway; the four of us walking the rest together.

As of 2014, Don Aristides has participated in 47 straight Desfiles de Silleteros (Flower Parades), and in that time, he’s created and carried all forms of silletas.

He is adamant that his participation in the parade is not about trying to win awards or money; those material benefits are secondary to keeping the flowers and tradition alive.

Our tour of Don Aristides’ home included a visit to his greenhouse. He also took the time to point out some of the most interesting plants and flowers growing immediately around his home.

One such flower was the small blue “forget me not” which he told us dated back to 1897.

His hospitality was also appreciated; I’m not one to turn down a delicious arepa with cheese and hot chocolate.

This basic meal, as pictured above, remains one of my favorites from Colombia. Warm, hearty comfort food.Don Aristides’ tireless dedication to flower growing and arrangement led him to become the face of the silleteros in old marketing campaigns.

He’s traveled internationally to represent this proud tradition, yet he says what he appreciates most about the opportunities given him is the ability to have his family living around him in Santa Elena.I can think of no better way to tap into the spirit of the silletero tradition than to spend a half-day visiting Don Aristides.

To help with transportation and translation, I recommend booking the Silletero Tour with Medellín City Services.At the time of writing, the cost begins at $95 USD for one person and drops to $55 USD per person for two to four people. There’s also the option to extend your time in Santa Elena with a full day tour, which also includes lunch.