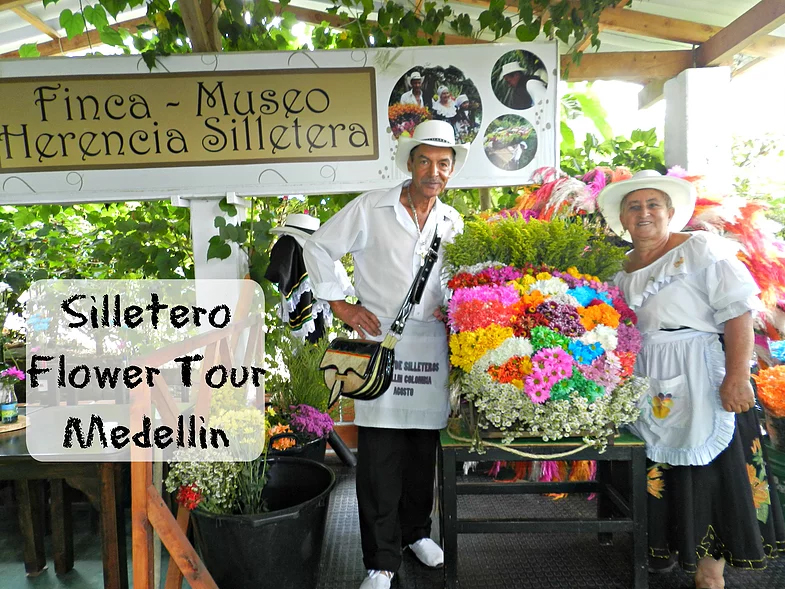 Standing high up in the mountains, in humid chilly air, surrounded by vibrant colours, and the small of fresh flours, I found myself in what I now describe as heaven’s garden. Being in Medellin on the first week of August, during the flower festival piqued my interest to know more. So I joined Medellin City Tours for the Silletero Flower tour.

Silleteros (coming from the word Silla – meaning chair), carry flowers on their back during the Flower Festival parade. The history of Silleteros goes back more than 200 years – to the days with no means of transportation. The locals of Santa Elena used to carry the sick on their back, on a wooden chair down to Medellin, to get the medical care required. The wooden chairs then started being used to transport food and flowers to and from the city. In the 1950’s someone noticed the beautiful parade of peasants, and  decided that this heritage should be celebrated. This gave rise to the yearly Fiera de las Flores (Flower Festival). Not anyone can be a silletero – it is an honour that is passed through generations, or if you are lucky to find someone who is willing to transfer their role. Silleteros start parading from the tender age of 8 years old, and keep at it until they are physically able to do it.

Nowadays, the Fiera de las Flores is not only about the beautiful flower parade, but it has also become an contest whereby the best Silleteros are awarded medallions for their hard work. Throughout this 1 week festival, other artistic events including free musical concerts are organised throughout the City of Medellin. Silleteros are also invited to different cities around the world, like New York, where they can present their culture to other people.

Santa Elena makes for an ideal place, with the perfect conditions for nature to flourish. This is because of it’s geographical position of high altitude,  it’s humidity, and enough rain (during the night) and sunshine (during the day) that enables flowers to grow 10 to 15 times faster than in other locations.

We visited Finca-Museo Herencia Silletera, where we were hosted by Don Dorigo and Dona Edelmira. First they showed us their beautiful garden which is home to many variations of lovely flowers. They explained each flower type that they displayed honourably in their ornamental garden. At their finca, they also have a museum in which they have medals that they have earned over the generations as Silleteros, as well as photos and newspaper cuttings that demonstrate their achievements.

When it was time for the Silleteros explanation, we were gathered under a nicely decorated gazebo and treated with Empanadas, and a lovely traditional warm drink made out of sugar cane. Don Dorigo uses a wooden chair that has been used by his ancestors of Silleteros for over 90 years. The traditional Silleteros weighs 80 to 100 Kilograms and includes having various bunches of flowers to make up one beautiful flower arrangement. Over time, 3 more kinds of flower displays have been developed:

Can you imagine carrying a 100 Kilogram flower arrangement on your back, strapped to your head, and walking in a leaned position for a 3 hour parade? We’ll trust me, we’ve tried it for a few seconds, and it was not easy. But that is best part of the tour, where you get to wear their traditional clothes, and be Silletero for a while.

At the Finca, they have their own mirador, where you can enjoy the stunning view of the Andes mountains in the distance. At the end of the tour, make sure to taste their home made traditional sweets – they are to die for!

Medellin City Tours offers these tours at $55 per person (minimum 2 people). The English speaking guide offered will help you have conversations with the Spanish-speaking Silleteros, and he’ll also use his air-conditioned car to pick you up from your hotel. Tours are done daily, however if you want to get up close and person with the Silleteros, it is advisable to avoid the first week of August since it is their busiest time of the year.