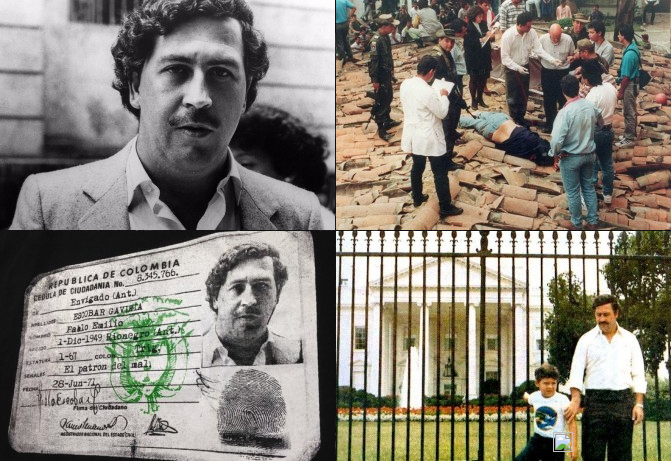 Colombian narco trafficker Pablo Emilio Escobar Gaviria was a terrorist and a mass murderer at the head of the Medellin Cartel, the largest and most devastating criminal empire in the world during the 1980s and 1990s. Escobar murdered thousands, made billions, attacked his own country with a flood of violence and attacked the United States with a flood of cocaine. Twenty years after his death Escobar’s grave is part of an increasingly popular narco tourism tour in his hometown of Medellin. On assignment for our first piece for a fantastic, smart, long(ish) form journalism site called Roads and Kingdoms, we signed up for an Escobar Tour of the city.

The Pablo Escobar Tour is born

Soon after Escobar died his ever enterprising body guards began leading curious Colombians to some of Escobar’s former haunts. That loose route slowly coalesced into what’s now known as the Escobar Tour of Medellin. Currently offered by at least 10 different local tour companies, the guided trips vary in quality and itinerary. They also stir strong emotions among Colombians who grapple with the pros and cons of selling Pablo.

Our guide, John Echeverry, had only been leading the Escobar Tour for Medellin City Tours (US$45 per person, booked through Viator) for a few months and he admitted that he had to think long and hard before agreeing to do it. He feared it “wasn’t good to talk about those things” but now believes the tour is a good thing because foreigners learn about some of the pain Escobar caused and it encourages Colombians to discuss their dark citizen too instead of trying to pretend he never existed.

The surprisingly restrained grave of Pablo Escobar, one of the world’s most violent criminals, is in a peaceful, verdant cemetery on the south side of Medellin, Colombia. It’s a highlight of every Escobar Tour of the city.

Graves and ghosts on the Escobar Tour

During the course of our tour, which took about three hours, John drove us around Medellin in a brand new van and showed us Escobar’s grave, the building where he was shot, the huge fortress-like residence which was bombed by the Cali Cartel and a few other grisly landmarks. These places were certainly full of history and tension.

When we arrived at the house where Escobar died, for example, a woman on  the sidewalk out front, perhaps the owner, scowled at us as if she’d had it up to here with gawking tourists. When we arrived at the Monaco building, which was briefly used as offices by the Medellin police force post-Escobar, John told us even the cops say the now abandoned building is haunted.

Escobar’s reign of terror finally ended right here when local police, US DEA agents and members of the Colombian military finally caught up with the king of cocaine. Escobar died on the roof from gunshot wounds in this quiet suburb of Medellin.

It wasn’t the sites themselves or even the ghost stories that were most compelling. What made the tour worthwhile from our point of view was our guide. In perfect English and with perfect sincerity and honesty John generously shared his own memories and experiences from the Escobar era. He talked about the fear of random violence and car bombs that made him and his friends too afraid to go out. That fear was reinforced when the father of one of John’s friends was shot and killed at random while the family was having dinner in a restaurant.

He explained that part of the reason Medellin has so many shopping malls (there are a LOT) is because the malls were one of the few places where people felt safe so they flourished during Escobar’s time. Major construction projects are also a favored way of laundering large amounts of ill-gotten gain. John also recounted the time when his entire class in grade school was invited to Escobar’s ranch and hacienda for the weekend because his classmate was the son of Escobar’s cousin, business manager and right hand man (full details are in our story on Roads and Kingdoms).

Throughout the entire tour John never once used Pablo’s name, referring to him instead as “that man” as if it was still too painful to say his name out loud.

Officials at the Medellin Convention and Visitors Bureau distance themselves from Escobar Tours which they say are “not something that we promote” and locals, like John, have a complicated relationship with the tours. Everyone acknowledges that the recent increase in tourism to Medellin is a good thing but we’ve certainly gotten the impression that Colombians wish visitors would stop focusing on Escobar.

Camilo Uribe, owner of Medellin City Tours is well aware of the delicate nature of the Escobar Tour that he’s offered since 2008 but tourists can’t seem to get enough. Camilo told us that back in 2008 he was getting 3 to 4 bookings a month for his Escobar Tour but he’s now up to 3 to 4 bookings per day, 90% of them foreigners. Camilo only assigns this tour to his older guides who, like John, have personal Escobar connections and memories to share.

Pablo Escobar turned this entire building, called Monaco, into a home for his family and for his car collection and art collection which included works by Dali, Chagall and Colombia’s own Fernando Botero. The rival Cali Cartel exploded a car bomb in front of the building in a failed attempt to kill Escobar. It’s empty now and some say it’s now haunted.

Also as part of our reporting we’ve also been bingeing on back-to-back episodes of a Colombian-produced series called Pablo Escobar: Patron del Mal (Boss of Evil).  The chilling 74 part biopic has swept the ratings (one quarter of the entire population of Colombia watched the debut episode) but many Colombians have been unwilling or unable to relive the past in their living rooms each night.

There are also fears that the series has introduced Escobar to a whole new generation of Colombians who did not live through his carnage and who may now view Patron del  Mal as an instructional video for fast-tracking out of the slums. This risk is especially high in Medellin which the United Nations just ranked as having the most pronounced wealth inequity of any city in Latin America. You can watch subtitled episodes of Patron del Mal on the website for Telemundo which broadcast the series in the US.

So, is “selling Pablo” a good thing or a bad thing for Colombia? That’s the issue we tackled in our first piece for Roads and Kingdoms which was also published on Slate.com. In the piece we take a long look at Escobar Tours, the theme park that now operates on one of Escobar  Hacienda Napoles hideout, his son’s attempts to sell you $195 jeans with Escobar’s name on them and more. Escobar’s sister weighs in, as does famous Colombian artist Fernando Botero.

If you are interesed on taking Pablo Escobar Tour go to this link: https://www.medellincitytours.com/pablo-escobar-tour/