Take a Ride Around Medellín 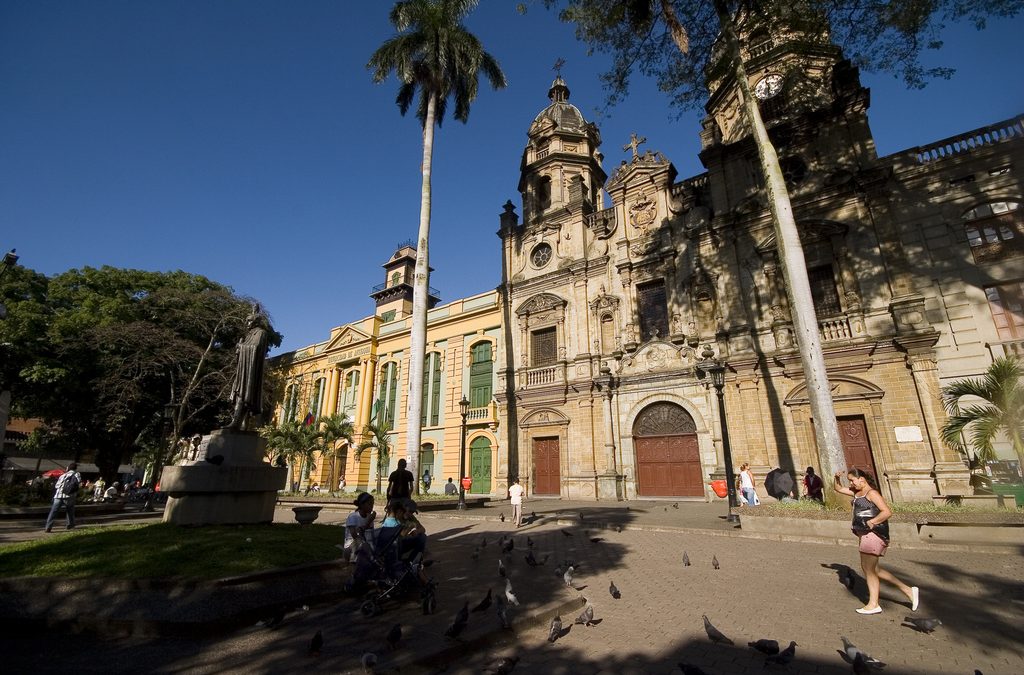 For all my time in Medellín, there’s still so much I’ve yet to see and discover. I was reminded of this fact during a recent half-day city tour with Camilo Uribe, founder of Medellín City Services.

Camilo is a paisa who studied and lived in the United States, before settling back in Medellín. In addition to running tours and acting as a concierge for foreigners visiting the city, he also works in real estate.

He picked me up from home in an SUV one Saturday afternoon in April, along with three others. The goal of the tour was to expose me to some places I hadn’t been before, and he succeeded. Our first few stops were downtown, beginning with Plazuela San Ignacio. The main feature of this lively plaza is Iglesia San Ignacio, which was built from 1803 to 1809. The exterior is Baroque, while the spacious interior is Colonial. This Catholic church is now run by the University of Antioquia, which occupies the adjacent yellow building.

We returned to the car for the short ride over to Parque Bolivar.

I’d been here a few times before, but to my surprise, I’d never seen the austere Metropolitan Cathedral towering over one end of the park.

Formally known as the Metropolitan Cathedral Basilica of the Immaculate Conception, this Romanesque Roman Catholic cathedral is built entirely of brick and covers 5,000 square meters. Our third stop of the afternoon was Museo Cementerio San Pedro, located a few blocks from the Hospital metro stop.

In the 19th century, a group of Medellín’s wealthiest families banded together to create their own cemetery to make sure they wouldn’t be buried in the same cemeteries as those of the common folk back then. Walking inside, it reminded me of the famous Recoleta Cemetery in Buenos Aires. The most elaborate sculptures are carved from imported Italian marble.

More than one former president of Colombia is buried here, as well as at least one former governor of Antioquia, a famous writer, and for a few weeks, tango singer Carlos Gardel (before he was ultimately returned to Argentina).

The cemetery also features a small chapel with beautiful stained glass windows.Despite its place in the midst of the chaos, traffic and noise of downtown Medellín, the cemetery is large enough, and quiet enough, that you can hear birds chirping. The environment may be somber, but it’s also relaxing. Today, the cemetery is still receiving the newly deceased, only now they come from all socio-economic levels.

For tourists who visit Cementerio San Pedro with Camilo, he arranges a guided tour with one of the staff, and if necessary, acts as a translator.

From the cemetery, Camilo drove us into the western part of the city, where he parked the car outside the Suramericana metro station, and we boarded a train west toward San Javier (the cost of metro tickets are included in the tour).

At San Javier, we transferred to the metrocable to La Aurora, and slowly began our ascent into Comuna 13. It’d been over five years since I first made the trip, and as we approached La Aurora, I could tell a lot had changed in that time. Exiting the metrocable station, we were greeted by a complex of high-rise apartment buildings constructed to host the athletes of the 2010 South American Games.

When the Games were over, the apartments were made available to the locals, thus offering them a higher standard of living compared to the homes that previously occupied the area.

Interestingly, Camilo explained that not all residents of this poorer district were anxious to leave their makeshift homes on the hills, despite the inconvenient locations and potential danger from landslides. As I’d learned in South Africa’s townships, a strong sense of community ties these residents together, and the promise of a new apartment in a more stable structure isn’t always enough to encourage people to abandon their homes.

In addition to the residential development, a new multi-story medical clinic had recently opened adjacent the metrocable in La Aurora, offering residents of Comuna 13 easier access to medical care.

The tour ended with us descending on the metrocable, and returning by train to Camilo’s SUV before he then dropped me off at home. We’d covered a lot of ground in four hours.

Medellín City Services offers 10 different options for seeing the city and surrounding area, depending on your tastes and interests.

Beyond these recommended itineraries, Camilo is very open and flexible to designing a tour that takes you to the places you want to see and experience, as was the case with my half day city tour. He has experience planning trips for groups of all sizes, from a few people, to several hundred.