Jardín: A trip to a coffee farm and a picturesque pueblo 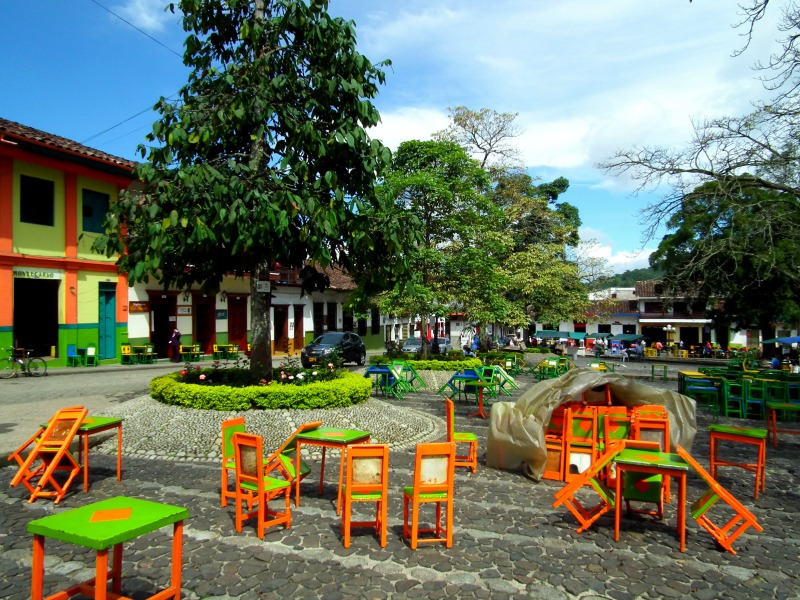 The two hour drive from Medellín to Jardín was never monotonous. The road snakes along on mountains cliffs and every moment there is a new view of the valley or the irregular face of a faraway mountain. The Colombian sky is so big and the land so varied my view only ends at the curve of the earth. And there were the pueblos, or small towns, one would encounter every now and then from the highway. They whirred past me like a silent film, but I was cut off from them by a pane of tinted glass and the celerity of my motion.

Here, there were only a few families, only a few shops. Tired old men sipping beers in the shade of an awning, a few women walking hand in hand with their teenage daughters, a shirtless young man giving his motorbike a tune up. We passed them all by and were soon surrounded again by dense forests and manicured farm land. Earlier on the drive out of Medellín venders walked up to the drivers of the cars stuck in traffic selling chips, mango, candy, soda, cigarettes, and ice cold water. We got to the plantation by noon. It was, as is common, built on a steep cliff overlooking the bowl shaped valley and opposite mountain face.

The people that worked the farm were young, and many had tattoos of the homemade variety, doubtless executed by some kitchen wizard, maybe on premises. Spare outlines of assault rifles, Spanish words, and swirling abstractions decorating their arms. A few had the names of their novias, whether current or past, one can’t be sure, ornamenting their necks.

The view from the farm, which lay on a cliff near Jardín, was vertiginous and stunningly green. Palm trees and country estates, or fincas, dotted the valley and the faraway mountains. A river ran through the valley. Hawks encircled the air.
One of the workers guided our small group through the process of growing coffee from a seedling, to cleaning, drying, and husking the beans or cherries. Roasting, evidently a big pain in the neck, is done elsewhere.

After we were led through the relatively few steps of the process we took one last look at the valley and got in the car to backtrack a bit to the town of Jardín. A picturesque pueblo in the heart of coffee country, Jardín, like every town the Spanish ever built, has a cathedral in the center of it’s plaza that dwarfs all the surrounding buildings and forms the focal point of the entire town. Ash Wednesday was declaring itself from every loyal forehead that displayed the symbol of the faith in black soot. People of all ages lolled around the square, teenagers sitting on benches and talking, relaxed couples drinking coffee under yellow umbrellas. The cathedral was one of the best that I’ve seen, though growing up in the US can make one easier to impress when it comes to cathedrals. I’m more used to the gaudy modernity of the Mega Church, with its textured golfball dome and abstractions in the stained glass.

As we walked from the square down a street towards the restaurant we’d be eating at I appreciated the many colors of the houses here. Not all of Colombia loves the stateliness of endless red bricks like Medellín seems to, and this neighborhood was a burst of color. We walked into a nearby restaurant with green doors and had a good traditional Colombian meal. I had heard that Jardín boasted a cable car, one of the few in Antioquia that wasn’t in Medellín, and so I went to go find it.

The cable cars in Jardín are less stifling and muggy than the ones in Medellín, which, when filled up with people can become an airless heat box, and the beautiful view is compromised by a feeling of personal discomfort. Maybe it’s the inclusion of actual windows on the Jardín cable cars, instead of the small circles bored in the plastic you find in Medellín. Maybe it’s the smaller cargo of 4 people instead of 6-8. It’s a wonderful view from the top, at any rate. After looking out at the town, a final fantasy style map from this distance, I noticed somebody paragliding off in the distance. The bigness of the views in Colombia cannot be overstated. They really go out as far as the eye can see, and are full of hills, variations of tone and terrain, little details in sharp focus because of the clarity of the country air.

It was only right before we left that I grabbed a cup of coffee from a cafe next to the big church. It seemed necessary for me to actually drink some of the end product of these beans I’d spent all day examining. The drive back went by all in an instant. My traveling companions, an older couple consisting of a professor emeritus of economics and a registered nurse, were great fun to talk with.  Thus the long drive back to Medellín was much enlivened, and I especially liked hearing the story of how they met in 1960’s Washington DC, two Cuban expats discovering their adopted country together as their old home broiled in revolution. Medellín was being washed in a misty rain that turned into  downpour as we returned, and the motorbikes hummed in low gear as they cruised at slower speeds under the deluge.

Thanks to Camilo Uribe of Medellin City Services for showing me around Jardín. They have many itineraries up on their site for perusal, including transport and adventure, entertainment, food, as well as the ever popular Pablo Escobar tour. They also specialize in custom tours.