NY Times Vlog: I Just Got Back From Medellín! 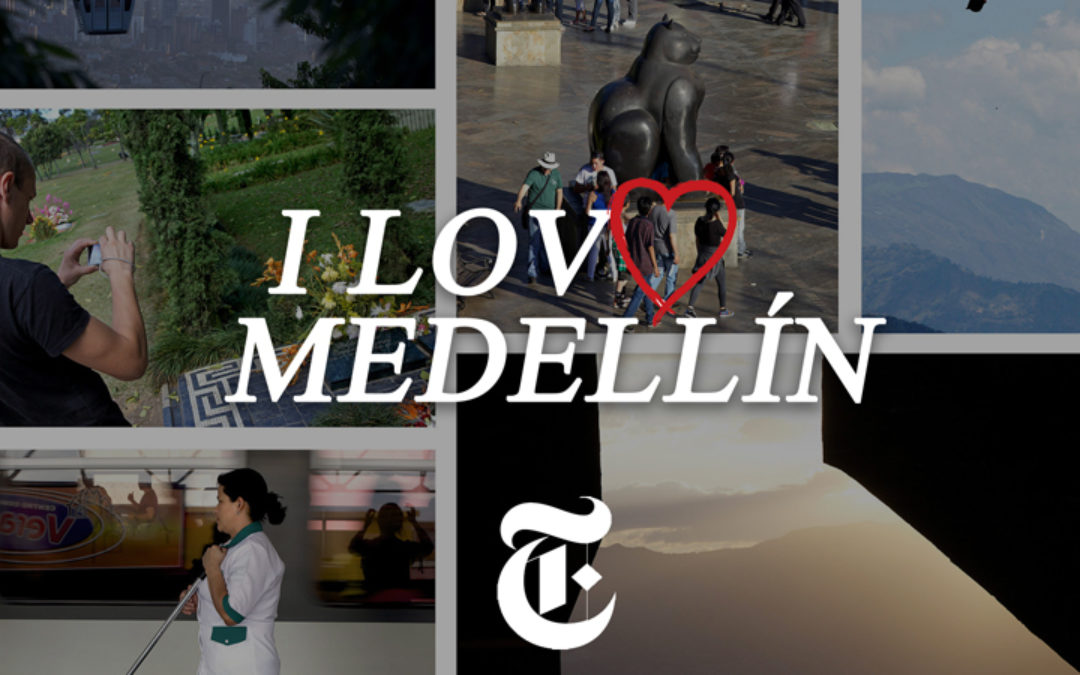 Clockwise from top left: Floating above the city in a gondola, Fernando Botero donated sculptures to the city, paragliding, the Biblioteca España, cleaning a metro station and visiting the grave of Pablo Escobar.

IF Medellín is still a city that puts its visitors on guard, you wouldn’t know it from my traveling companion’s choice of footwear. “I can’t believe you’re wearing pink sneakers here!” I exclaimed to my friend Ryan, minutes after we arrived at the airport of Colombia’s second biggest city. “They’re not pink,” Ryan told me. “They’re salmon khaki. They’re pueblo rose.”

In the 1980s and early 1990s, you traveled to the largest cocaine-producing city in the world in the same manner that you lowered yourself into a tank of feral hogs: accompanied by either an insurance policy or a very porous concept of life expectancy. Then the home of the drug kingpin Pablo Escobar, the city had its renown for cultivating prize orchids usurped by its ability to put the k in the word “traffick.”

As Michael Kimmelman reported in this paper last year, the annual homicide rate in Medellín 20 years ago was 381 per 100,000. In New York City, this would come to more than 30,000 murders a year.

Mr. Escobar’s death at the hands of the police in 1993 did much to cool the fires. At first the changes were subtle; gang members reportedly started showing up at group therapy sessions; former hit men started taking guitar lessons. Then this city of 3.5 million was gradually graced with a series of improvements befitting its jewel-like setting in a lush valley surrounded by green mountains. Parks, libraries, museums and hotels were built. A gleaming metro system was completed in the mid-90s; in 2006 and 2008, gondolas providing service to the city’s hillside shantytowns were added, reducing what had been a two-hour trip down to a few minutes. Fernando Botero, a Medellín native, donated more than 1,000 pieces of his own and others’ art to the Museo de Antioquia. Birds, in short, began to twitter.

Eager to sample this new Medellín, I canvassed my loved ones for a traveling companion. Thinking his essential winsomeness would be the perfect litmus test for any chicanery or danger, I selected my puckish 24-year-old assistant, Ryan Haney, a heterosexual mama’s boy who sometimes refers to his knapsack as “my little bag.” I knew Ryan would want to run the idea past his mother, Angela; 24 hours later, we received her blessing.

Our first point of order was to take one of the several Pablo Escobar tours now offered in Medellín.  I ended up enlisting Medellín City Tours,  who took us to four Escobar-related sites. We saw the apartment building where Mr. Escobar’s wife and bodyguards lived; the roof where he was gunned down by police; a neighboring roof the police used to remove his body (Mr. Uribe: “They needed a lower roof. He was very heavy then”); and Mr. Escobar’s grave.

Between sights, Mr. Uribe recounted how the drug lord started his career by stealing headstones from cemeteries and reselling them, and how he gradually widened his power base, even holding office in government at one point. Ryan took all the accounts of cocaine-fueled mayhem in his stride, but when we visited the grave in a lovely, elevated cemetery in the middle of town, I started to feel vaguely anxious. I asked, “There aren’t cameras anywhere that are recording us, are there?” Mr. Uribe smiled, then pointed at four spindly bushes next to Mr. Escobar’s grave and mused, “Microphones.”

On the ride back to our hotel, I told Mr. Uribe that I’d taken some heat from an American acquaintance when I’d told him I was going on an Escobar tour, given that Colombia is trying hard to change its image. Mr. Uribe said, “Don’t tell any Colombians that you went on this tour.”

We spent most of our evenings in El Poblado. The heart of the neighborhood is Parque Lleras, a block-wide, restaurant- and bar-lined park that has great people-watching at night, and whose Christmas lights were phantasmagoric. All the beautiful young Colombians — Sofia Vergara, we should not forget, was discovered on a beach in Colombia — throng to the park at night, the women in short bandage skirts and three-inch heels, the men with their chests puffed out.

INDEED, Medellín is known for its night life. This is a city that likes to eat and drink and dance and watch soccer, often in groups, often in bars and restaurants. One night, sitting on a bench in Parque Lleras while a soccer game was being televised, I noted the number of TV screens within eyesight. I counted 13.

This is also a city that loves the sight of a sculpture or a drawing en plein-air. Major new buildings in Medellín are required to include public art; walls in both metro stations and favelas are bedecked with colorful murals. The city’s spectacular Christmas lights (this year’s theme: Flora and Fauna) are to Rockefeller Center’s what Cirque du Soleil is to a mime in a coffin. Night is turned into day — a throbbing, pistachio-hued day.

Also striking, though, are the sculptures that Mr. Botero donated to the city. As we approached the Museo de Antioquia downtown, we noticed 15 or so eight-foot-tall bronze Botero sculptures of bulbous people and swollen animals in the plaza. Though all the pieces were a dark chocolaty color, Ryan pointed out that some of the figures’ individual body parts — here a kneecap, there a foot — had been rubbed til golden. The nonbuff had been buffed.

Inside the museum, we marveled at a floor’s worth of paintings by Mr. Botero, including two of the heavyset Mr. Escobar being shot by police. At gallery’s end, a placard on the wall asked, “Why does Botero paint fat people?” An accompanying quote from the artist explained, “I do not see them as fat, but voluminous.” Ah. I will try to keep this in mind next time I visit a volume farm.

A version of this article appears in print on January 20, 2013, on Page TR1 of the New York edition with the headline: I Just Got Back From Medellín!