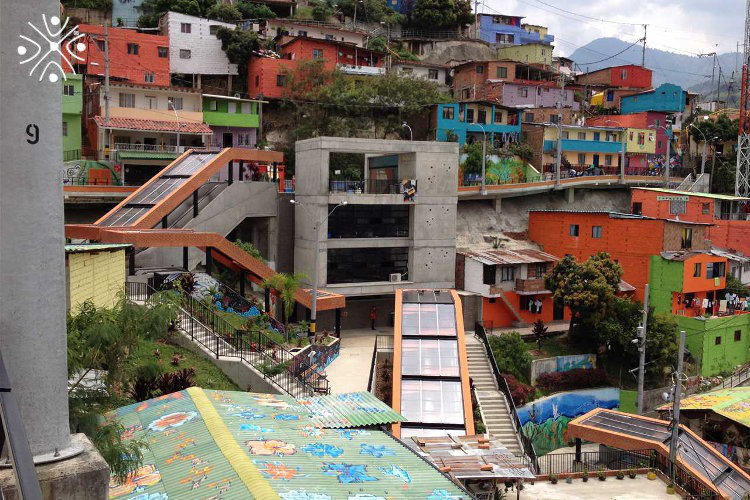 Brightly coloured graffiti rippled along the walls. Crowds of children played in the dappled sunlight threading it’s way through the streets. The shiny metal escalator loomed above me, leading upwards and into the slums of Medellin, a former war-zone. Just a decade ago this had been a very different place, gangs of youths armed with kalishnikovs and machetes had wandered the streets killing to control the drug trade. The police had been too scared to enter the slums.

Today, there is little evidence of the chaos which had reigned supreme. The slums are spotless. Recycling bins adorn every corner, police keep a careful eye over the escalators; the pride of the community. A huge library, a work of art, adorned the top of the hill. I passed a kid smiling shyly as cries of ‘hello’ followed me into the slums. It’s odd to refer to the hillside barrios of Medellin as slums, in my experience, slums are somewhere you don’t particularly want to go, easily identifiable by piles of burning rubbish, homes of plastic sheeting and the smell of human waste, perhaps I have spent too long in India…

The slums of Medellin are quite different to anything I have ever seen, brightly coloured houses shining in the sun, friendly locals, tasty glasses of sugarcane juice with lime. It’s hard to imagine that such a laid-back environment had such a turbulent history.

Camillo, my friend and guide, explained that the slums could still be dangerous, this wasn’t the kind of place you wanted to flash your cash but it was unlikely you would get in much trouble. In the past, he told me, shootings were common with casualty rates averaging around twenty a day. The army had finally stepped in, taking control of the district and shooting on sight those who dared to break the curfew.

Slowly, the slums had began to change. The government had provided funds for the escalators, linking up the poorest of Medellin’s communities with the rest of the city; slowly but surely, employment had gone up. Having a job no longer meant a two-hour commute was necessary. Librarys had begun to open, huge, futuristic buildings designed by some of Medellin’s best and brightest. Open air gyms had been paid for, the equipment consisting of shiny bodyweight machines and home-made cement-bucket barbells.

Children had started to go to school, the sparkling new metro system whisking them anywhere in the city for under a dollar. Finally, the cable cars had come, allowing citizens in the most remote neighbourhoods to finally connect with the city, it had changed everything.

“When you go on the metro or in the cable cars, you won’t see one scratch or piece of litter, we Paisas are proud of Medellin’s public transport, this is one of the most innovative cities in the world”

The city of Medellin is unlike anywhere else in Colombia, it was in fact, at one point, very nearly it’s own sovereign state. Medellin lies in a craggy bowl of mountains, separated from the rest of the country, a part of Colombia and yet very different. The citizens refer to themselves as ‘Paisas’, a genetically isolated community made up of the descendants of Basque, Jewish and Spanish settlers. Today, the city is world-famous for it’s fiercely independent citizens, gleaming libraries and innovativeness, many Paisas claim that Medellin is the true capital of Colombia.

Fifteen years ago, it was a very different story, Medellin was famous for just one thing; Pablo Escobar. He is long gone, killed in a hail of gunfire, but his legacy still lives on. Some Paisas see him as a Robin Hood figure, an image he worked hard to cultivate, but most see him simply as a bad guy who plunged the city into a civil war which it is still recovering from today.

Even today, a web of facts, myths and half-truths surround his legacy. Some claim he personally paid for the city metro (impossible as he was dead  at the time), others that he paid $1,000 to every man who killed a police officer (believed to be true) and some that he had a catalogue of beautiful women whom he could have flown into his prison by helicopter for an evening of entertainment (also believed to be true).

Today, the helicopter pad gathers weeds and dust. The slums march ever further up the mountains, separate and yet connected through the wondrous cable cars; the single most important change in Medellin for years. For those wanting to journey into the slums of Medellin, you may be surprised at what you find; a curious yet welcoming and extremely open community; it may well change how you feel about ‘slums’ for good, you shall lead humbled.

If you’re interested in exploring the slums then get in touch with Camilo at Medellin City Tours.